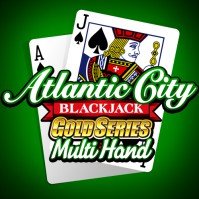 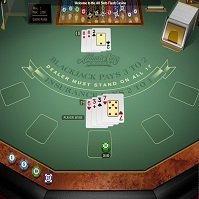 So, Atlantic City Blackjack was created, also known as American Blackjack. The game is often described as “Hole Card” game, meaning that the dealer deals himself 2 cards, one facing up, one facing down. The card facing down is regarded as the Hold Card. The dealer will always check the Hole Card in case his or her other card is 10-valued card – a 10, Ace, Jack, Queen or King.

Atlantic City Blackjack differs in two important ways from the standard Blackjack game. First of all, the Atlantic City version uses 8 decks instead of the standard 6 decks. This basically means that the dealer has higher odds of winning because busting becomes less frequent when more decks are in play. This way, the dealer will less often go over 21 when they have to ‘Hit’ on 17. This clearly gives casinos the upper hand in this game.

Secondly, Atlantic City Blackjack will change the odds in favour of the player with the ‘Late Surrender’ option. The ‘Late Surrender’ option gives the dealer the chance to check for blackjack if they have an Ace or another 10-valued card; if they don’t have it, the player now has the option to give up his Hand. This means the player can get back half his stake if he chooses to surrender when he knows he can’t win for sure.

Players need to know that the dealer will always ‘Stand’ if his Hand is 17 or higher. Players can ‘Double Down’ on any 2 cards, but also double down after a ‘Split’. Players who want to play a greater number of hands are allowed up to 3 splits, which will result in 4 Hands. If the player is dealt two Aces, they can split them once, and only one card is dealt atop that Ace.

Players can also split a pair of Aces, and when one of the cards dealt atop that Ace is a 10-valued card, this will automatically be 21, but not Blackjack. It is highly recommended that if you are dealt a pair of Aces, you should split. One should also ‘Stand’ when having a pair of 10s and not split them.

Among the Pros in the game, the low house advantage of 0.36% and the Late Surrender features clearly stand out. This version has a good payout with 2:1 odds. The only disadvantage is the large number of decks used in the game, which tips the odds in favour of the dealer.

Atlantic City Blackjack is highly recommended for players who want to enjoy the American version of blackjack and test their luck using the low house edge and the Late Surrender option.

A: Atlantic City Blackjack is played with 8 standard decks of cards and, like other blackjack variations, is played against a dealer. The player’s objective is to beat the dealer without busting by breaking 21.

Q: Can I play this game on my mobile device?

Q: What is the best strategy to use when playing Atlantic City Blackjack?

Q: Would you recommend this game?

A: Atlantic City Blackjack is highly recommended for players who want to enjoy the American version of blackjack and test their luck using the low house edge and the Late Surrender option.